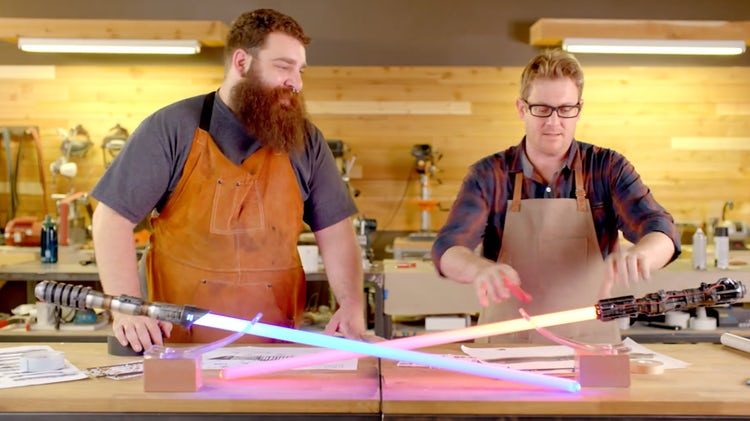 It’s safe to say that, without much debate, the Star Wars franchise is the most prolific sci-fi franchise ever. After all, the damn thing has been around for 40 years already, growing from a movie about Luke Skywalker and Han Solo trying to rescue Princess Leia from Darth Vader and The Imperial Forces, to a full on masterpiece, with a handful of spin-off series and more films than anyone could have ever imagined.

Considering guys can’t get enough of Star Wars, it’s easy to see why so many people will go to great lengths to try and duplicate so many things from the film. We’ve seen people dress up as numerous Star Wars characters for, well, ever, line up outside theaters in anticipation of the newest movie release, and, thanks to some kick-ass guys who host the Facebook show called “The Master And Apprentice Show” — a show from Rooster Teeth — we now know what it takes to make a homemade lightsaber. Check out the tutorial below.

We’re not sure about you, but having a homemade lightsaber is one of those things that you don’t know you really need or want in your life until you have one. And, because we now know how to do it ourselves, we might just have to get the materials and spend this weekend putting this together, because it’s so awesome.

“The Master And Apprentice Show” doesn’t just stop there, though, as the DIY series actually shows viewers all the tips and tricks that professionals use to make their very own, homemade props from iconic films like Destiny 2 and Blade Runner.

For those who are all about kick-ass gear and awesome DIY projects, taking a stab at this lightsaber might be a cool weekend project to knockout. Now, go forth and take down the Evil Empire, guys!