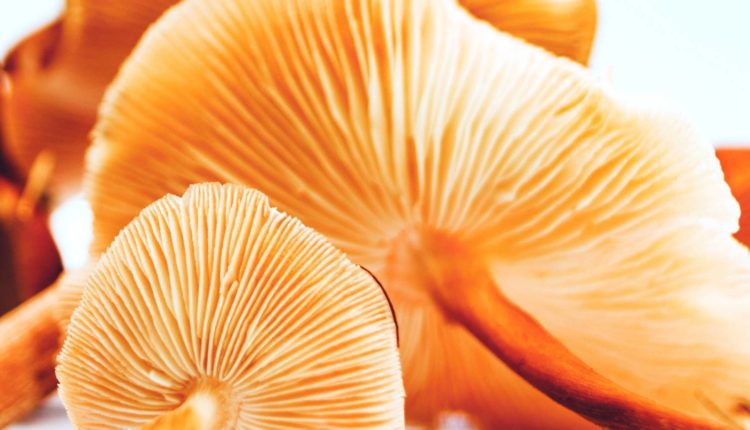 This story could start in a lot of places—the mountains of Bhutan, in Prague or Vienna or Venice Beach, but ultimately, all roads lead to my kitchen, where I’ve just used the lukewarm remainder of my morning coffee to wash down $11 worth of rare Himalayan mushrooms. It’s 10 am on a Wednesday, and I’m not sure what’s about to happen, but I hope something does. These mushrooms won’t get me high in a psychedelic sense, but instead carry the vague but promising notions of increased vitality, immunity and mental and physical stamina.

At least these are the potential benefits listed on my little glass jar of Cordyceps+. Inside are 30 clear gel capsules, each containing an assemblage of eight herbs and the marquee component—cordyceps. Together these ingredients blend into a dull brown the color of wet sand. Each capsule contains 58.33mg—or .00012 pounds—of the cordyceps mushroom, a full pound of which retails for a cool $10,000, making it the most expensive mushrooms in the world, more on par with gold than truffles. My little jar sells for $168 and lasts between 10-15 days, making it—beyond the Gucci pumps handed down to me by a friend’s mom—the only luxury product in my possession, and certainly the only one inside my body.

“Somebody asked me at the beginning, what do you want to do?” says Joel Einhorn the founder of HANAH, the Venice, California-based company that makes Cordyceps+. “I was like, ‘I want to create the Chanel of herbal medicine.’” It’s a sexy notion, particularly in a natural health and wellness industry crowded by tinctures, lotions, vitamins, crystals and Gwyneth’s Paltrow’s infamous yoni egg, which led company GOOP to be sued after it instructed women to put chunks of jade up their vaginas. With varying regulations and products making claims often untested by the FDA, supplements are a $37 billion dollar a year wild west industry that’s exploded with the mainstreaming of holistic and nature-based wellness.

But even to those who are obsessed with achieving optimal health, cordyceps has an almost mythical reputation. This has something to do with its commensurately mythical origin. The mushroom grows exclusively on the Tibetan Plateau—a thousand mile stretch surrounded by the world’s highest mountains and populated primarily by yaks—that runs from Western China to Nepal. Here, the cordyceps sinensis fungus feeds on caterpillar larvae of the ghost moth. First, the caterpillar buries itself a few inches in the soil, then the fungus enters it, and in time, kills and consumes it. It’s a process not unlike several of my romantic relationships. Cordyceps grow from the mummified remains of this caterpillar—imagine a regular caterpillar, but dead and with a narwhal-like mushroom horn growing from its head. This horn is the cash crop plucked from the ground during the three to six week cordyceps harvest that happens each spring, after the snowmelt.

Cordyceps grow from the mummified remains of this caterpillar—imagine a regular caterpillar, but dead and with a narwhal-like mushroom horn growing from its head.

Einhorn encountered cordyceps roughly 15 years after it first made headlines, when a brain injury led him to the Kingdom of Bhutan, a country of 800,000 that’s famous for measuring its gross national happiness. Einhorn was born in Chicago and made his way to Vienna as a study abroad student. He fell in love with the stately Austrian city, getting a job in business there during the late ‘90s tech boom. This position brought him to Prague where he made a fortune in the post-Velvet Revolution Czech capital, but hated sitting around in an office all day to get it.

In hopeful aim for contentment, Einhorn started his own investment fund, made even more money for himself and his partners. With paycheck after paycheck, he opened a Czech nightclub called The Roxy, took up DJing, competed in triathlons, launched a clothing line, opened a travel agency servicing the Czech film industry and served as Tom Cruise’s stand-in in Mission Impossible: Ghost Protocol. He was making six figures, snowboarding a lot and existing in a circuit of low-level Czech celebrities. Life was good, but still, Einhorn felt he had a greater purpose than impersonating to be Tom Cruise.

Then he fell off his bike. His head hit the ground, and when he came to, his collarbone was sticking out of his back. “If I hadn’t been wearing a helmet, Einhorn says, “I’d either be dead or eating through a straw for the rest of my life.” When he was released from a Prague hospital after the accident, he was depressed and constantly dizzy. But a chance meeting with Ayurvedic master Dr. V.A. Venugopal thrust him into the world of Ayurvedic medicine, and even after this holistic regimen helped him heal from the accident, Einhorn was keen to keep taking the supplements that had fixed his brain and delivered him to a new level of mental clarity and physical stamina.

The problem was that high-quality, low cost herbal supplements were almost impossible to get. Most companies grow them in bulk rather than harvesting them from their natural environments, thus compromising their effectiveness. It’s a practice even more common now as the industry has grown, and one Einhorn calls a massive swindle. “Imagine if you took Pinot Noir grapes and planted them in Arizona,” he says. “You’re going to get grapes; you’re going to get wine, but it’s going to have nothing to do with actual Pinot Noir.” 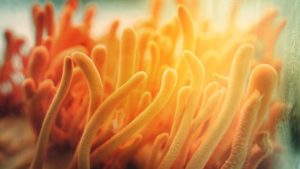 So his passion brought him to India to get the best herbs, then developed HANAH in Prague and, through an exceptionally well-connected friend, linked Jigyel Ugyen Wangchuk, the crown prince of Bhutan. (Wangchuck’s brother, King Jigme Namgyel Wangchuck shifted Bhutan’s ruling system to a parliamentary democracy in 2008, although the royal family remains beloved.) The Bhutanese royal invited Einhorn to the Kingdom, situated on the eastern edge of the Himalayas, as the royal family wanted to open the borders to some commerce. They thought Einhorn, with his interest in high-quality herbs and supplements, would be a good merchant for their country’s most sought after product—cordyceps.

It was shortly thereafter that Einhorn found himself high on six-day trek on the Tibetan Plateau, where he watched harvesters pluck mummified caterpillars from the freshly thawed earth. The mushroom is, for people in the area, a cash crop of gold rush proportions. In 2008, The Los Angeles Times profiled a Tibetan nomad making $1,000 a week, a massive sum in the country, by harvesting the mushroom. Einhorn’s heard of harvesters walking through the Bhutanese capital of Thimphu with the equivalent of a million dollars cash in bags strapped to their yak. Some of these harvesters bring their crop to town, buy supplies for the year and helicopter back to their village.

“As Bhutan becomes more of a destination and a really cool place on the planet, not only for tourists but for herbal remedies and other exports,” Einhorn says, contrasting Bhutan with the Amazon where many Indigenous populations have been plundered by the pharmaceutical industry. “[The people in charge] in Bhutan want to make sure locals get a piece of the pie.”

Indeed, the demand for cordyceps is significant. The mushroom is considered a status symbol throughout Asia and is becoming increasingly popular among athletes, CEOs and the Silicon Valley crowd always looking for that competitive edge as they march humanity kicking and screaming into the future. The jars in each batch of Cordyceps+ is individually numbered and when the batch is gone, the product is legitimately unavailable until the next shipment arrives to Venice—the biohacking, juice cleansing, microdosing bleeding edge of the wellness frontier—from Bhutan. HANAH’s last batch sold out in days. And while you can walk into any Whole Foods or Erehwon and find myriad cordyceps products, Einhorn says most of these mushrooms are lab grown and less likely to offer the full benefits of the cordyceps obtained 7,700 miles away on the Plateau.

He’s also quick to point out that HANAH, in collaboration with the strict Bhutanese government, is conscious of sustainability. While harvesters in China report diminished availability of the mushroom due to over harvesting and the destruction of the Plateau ecosystem, Bhutan—where citizens are required to wear traditional robes while in public and tourists must spend a certain amount of money during their stay in order to enter the country—has strict regulations about the harvesting window, even sending guards to regulate harvests so as not to destroy the fragile ecosystems in which the mushrooms are found. It altogether seems like a legitimately life affirming transcontinental partnership carried out on the mummified backs of valuable insects.

As for me, in the 14 days it takes me to consume my cordyceps, I feel fairly life affirmed. I wake up feeling rested and am increasingly compelled to try to inhale the pheromones of any semi-attractive man within a 20-foot radius. I get a cold but rebound quickly. My digestion improves and I feel calm, despite the general state of things. Most significantly, I’m focused. I’ve never taken Adderall, but this must be what Adderall feels like. When I sit down to work, instead of texting or looking at Instagram, I actually work. I get things done within a reasonable enough timeframe that at the end of the workday I’m not feeling anxious about the next one. By day four, I’ve deleted Twitter, Facebook and Instagram from my phone and find that in their absence, my brain feels better, like someone has poured coolant on it. And when my little jar runs out I’m like Cinderella when her carriage turns back into a pumpkin—my digestion goes sluggish, I’m less keen to smell the general male population and I reinstall all my social apps.

Ultimately, Cordyceps showed me what life is like with an energy and focus that’s hard to achieve on my own. It’d be great to feel so good again, if I could afford the luxury.