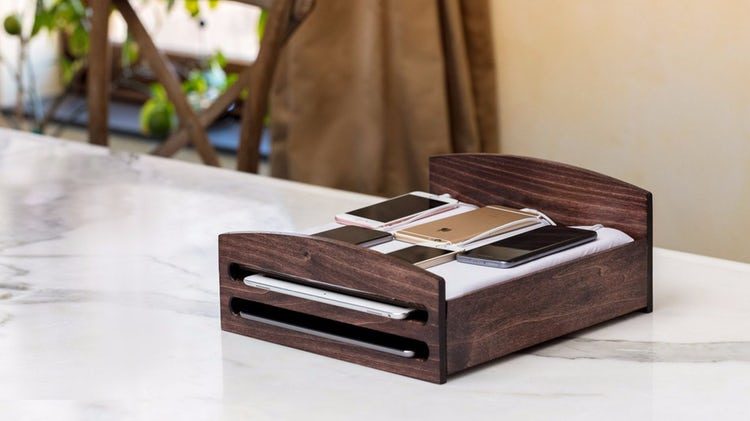 Drumroll, please, because, with the most ridiculous product we’ve seen this week, comes a hilarious (and mega practical) cell phone charging station that’s sure to make you lose that wall charger for good. Guys, meet The Phone Bed, a new idea from billionaire media mogul Arianna Huffington, and one of the best tech gifts we think you should know about this year. It literally brings new meaning to the phrase, “putting your feet up to recharge and unwind,” except it’s for your cell phone.

OK, enough dad jokes from us, let’s talk about how The Phone Bed came to be. More importantly, let’s talk about why it’s one of the strangest, yet, necessary, innovations when it comes to a cell phone charging station.

Arianna Huffington: How to turn sleep into your secret weapon from CNBC.

The whole idea behind The Phone Bed is simple, according to Arianna Huffington, who told CNBCthat it’s meant for people to, “put your phone under the blanket and you tuck it in and say goodnight,” letting it get a good night’s sleep and allowing you to avoid distractions. With room for up to 10 devices, including slots for iPads, The Phone Bed is literally a game-changer.

Look, we get it, it’s hella tacky and probably could be used more for a white elephant gift idea, but we promise you that this cell phone charging station will absolutely come in handy. Plus, we’re all too F’in concerned with “being connected” these days, anyway, so tucking your phone away for the night so you can finally binge-watch some TV shows and movies on Netflix will be good for you.

In the aforementioned CNBC piece, which references Virgin Group founder Sir Richard Branson, the billionaire agrees with the idea behind The Phone Bed, as he once said in an interview that, “every minute you spend on social media is a minute lost on your career. One will make you money, the other won’t.” In other words, put the damn phone down, fellas!

Arianna Huffington’s new cell phone charging station might appear strange on the surface, but here’s to it taking off and being successful — because, trust us, you’re not that great at online dating, anyway.

The Wild, Weird And Kick-Ass Future Of Gaming (What We Learned From CES, 2018)