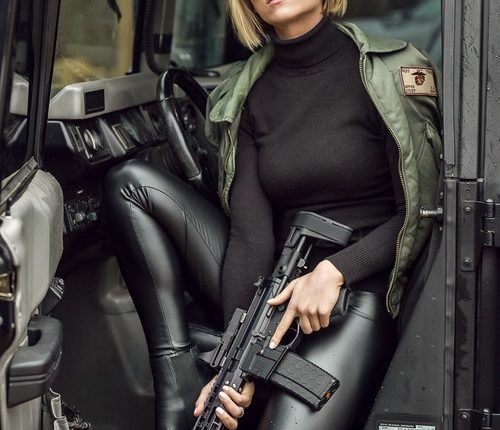 Meet Paige Munroe, A Model Whose Passion For Gun Control And Female Firepower Goes Beyond The Lens

It’s a common misconception that models don’t involve themselves with anything outside of the fashion industry. Much like basketball players should never just, “Shut up and dribble”, models shouldn’t be expected to just, “Shut up and pose”. Today, we’d like to introduce you guys to Paige Munroe, who, reluctantly began a career in modeling and has since gone on to defy all stereotypes.

As you’ll soon come to discover in the interview below, Paige has no issues in posing with fire arms and why should she? Through her story, we came to learn Paige’s history with guns and despite the very sensitive subject matter, her stance on gun control is refreshingly based on logic and intellect. She’s clear and steadfast in her beliefs and frankly, looks fantastic on camera — and everywhere else, we’re sure.

Accompanying the interview is a photo series shot by Eric Snyder Photography that would make Lara Croft herself blush. The intention, while not political, does relay a powerful message on female empowerment.

FHM: So, Paige, Tell Us About Yourself…

Paige Munroe: “I currently live in New York City, signed with Wilhelmina Models as a full time fashion and fitness model. I am originally from Rhode Island, where I grew up the youngest of 6 children. I have a degree in Business/Marketing, as well as a history of being a professional athlete. While in college I began competing in natural bodybuilding shows for the Bikini division. I quickly won my pro card and ranked top in my class. I was always into sports and physical activity of all sorts.

Starting at a young age I wanted to be known for my strength and intelligence. In fact, I never wanted to be a model. Which is exactly why two years ago I decided to become a model, I wanted to defy and challenge the stereotype.”

FHM: How Did You Become A Model?

Paige Munroe: “It was a conscious choice. Unlike many known models, I wasn’t discovered on the street or began at a young age because everyone told me I should. I had no interest in being a model. I wanted a career that took skill, hard work, smarts and something that made a positive impact. How could taking photos of clothes do that? …but I was wrong. I only paid attention to the stereotype and surface details. I didn’t actually know.

So when I go to a comfortable place in life where I had finished my degree, won pro status in my sport and started working a 9-5, I decided to throw it all away. I wasn’t ready to settle down. I realized I wasn’t challenging myself, not taking any real risk in my life. I knew I had much more to learn and grow as a person.

My first move was moving to New York, not knowing anyone in the fashion industry. Im not even joking when I say I used Google to research and figure out how to get signed with an agency. After many rejections and doubt, I persisted and in only a few months was able to sign with a major NYC agency. Now two years later I am signed in every major market in the US and internationally.”

FHM: When Did You First Start Shooting? We Mean Guns, Not Photography

Paige Munroe: “My interest in firearms began as a need to understand. I believe that ignorance creates fear. I wanted to know how they worked, how to disarm and handle one if I ever needed to. No one else in my family ever shot guns or talked about them much, so I took it upon myself to learn.

As I began to learn, I also recognized how incredible it is as a sport. My aim, confidence and overall sense of empowerment sky rocketed! The history, mechanics and everything that came along with this subject was much more than I had imagined. Most people see guns as purely violence and death, from stories of terrorist acts or hunting. I understood the association but it wasn’t how I felt my connection.

I respect the law and guns. I believe in gun control. Most importably I support being a responsible person in society. I don’t find it necessary for me to carry a gun, go hunting or own an assault riffle. I think more people need to understand that gun owners can support gun control too!”

All Images via Eric Snyder Photography

See more from Paige Munroe by scrolling down, and make sure to follow her on Instagram to see all she has going on.

FHM: Tell Us About This Shoot…

Paige Munroe: “As I mentioned before, I am from Rhode Island, where I am a member at the Elite Indoor gun range in Peacedale, RI. I love to visit my town, go clay shooting, take lessons, rent new guns and enjoy the positive and safe atmosphere. During the organization of this shoot, FIMS Firearms from New Jersey decided to be a big part of the production. FIMS supplied us with gear, guns and guidance, letting me shoot their FMR15 and FMP15.

Photographer Eric Snyder and makeup/hair artist Michaela Witt worked together to make sure the shots for this feature came out totally bad ass! We had so much fun. The intent for this photoshoot is to show that not only women, but responsible adults as well, can enjoy and appreciate the sport of shooting. Raised by a bad ass mother, with 4 sisters, I have always been a strong advocate for female empowerment. Too many times has society or the fashion industry made me doubt who I am as a woman. Being a female shooter in a male dominate sport makes me feel empowered. Learning, training and building my self confidence is something I hope all women get the opportunity to experience.

I am trained in handling firearms and we made sure to take extra precaution while producing this set. With all of tension surrounding the topic about guns and gun control, I want to make sure it is clear that I do not support gun violence, hunting or mishandling. I do believe in gun control and the sport of shooting. This article is meant to be fun, not a political opinion. So enjoy the photos we had such a blast creating!”

FHM Lastly, What Is Your Favorite Gun To Shoot?

Paige Munroe: “Hmm that is a tough one to answer. Although I love to experience all styles and types, I do really enjoy a gun I have to wrap myself around, embrace the power and use my entire body to control. The day of this shoot, my favorite was the two FIMS rifles FMR15 and FMP15 both in 556 caliber. It shot smooth and clean, fitting like a glove in my arms. You’ll see that gun in the photos where I’m dressed like Tomb Raider!”

See more photos of Paige Munroe by following her on Instagram.