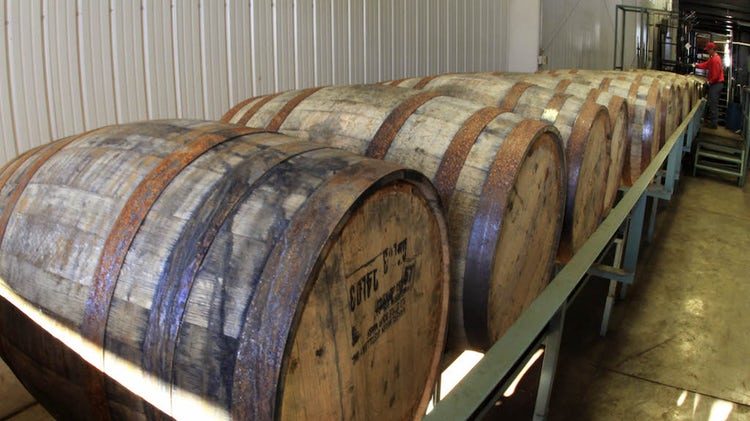 You might think the trend of aging wine in whiskey barrels is new, but it’s been going on for a long time. Way before French and American oak barrels intended for wine-filled California wineries, previously used barrels were often purchased from distillers. In recent years, many wine-makers are returning to this technique, and, even though it seems strange to some, it is far from a gimmick to drive wine sales.

Talking about the process, Bob Blue, winemaker from 1000 Stories, makers of 1000 Stories Bourbon Barrel Aged Zinfandel said, “we were (and continue to be) extremely conscious of crafting wines that are not a gimmick – especially as this way of making wine could really be perceived as such.”

Maybe you could throw a sub-par wine into a whiskey barrel and label it as “bourbon-barrel aged” and it would sell for a little while. But, eventually, consumers would be aware of the ploy and would stop purchasing it. “The wine has to be great before it even sees bourbon barrels, the magic that happens after that should enhance the wine further,” added Blue.

Years ago, when Blue was just starting out as a winemaker, it was almost unheard of to get French oak wine barrels — and American oak barrels were for whiskey, not wine. “But we still needed barrels to age our wine, so we purchased new and used bourbon barrels.”

Blue isn’t the only winemaker aging in whiskey barrels. Famed winery Robert Mondavi recently got in on the bourbon barrel-aged trend with its Robert Mondavi Bourbon Barrel Cabernet Sauvignon. Other wineries include: Apothic Wines, Fetzer Vineyards, and Cooper & Thief.

Unsurprisingly, for a winery aging in whiskey barrels, Cooper & Thief’s goal is to take traditional winemaking and add a hint of mischief. “We saw that there was an increased interest in the emerging method of cross-aging in spirits barrels, a practice that craft beer brewers have been employing for a while, but that the wine industry has been slow to adopt,” says Jeff Kasavan, winemaker for Cooper & Thief Cellarmasters. “I love that wine lovers and spirits lovers both have something unique and interesting to try when they open a bottle of our wine.”

How Does Bourbon-Barrel Aging Impact The Wine?

As compared to aging in new oak barrels, charred, ex-bourbon barrels have a very unique impact on the final product. “The char of a bourbon barrel imparts nuanced characteristics that we don’t get from wine barrels: dried herbs, a bit of smoke, charred vanilla,” says Blue. “These characteristics can be really overwhelming if out of balance, so we are diligent about using the bourbon barrels to enhance the complexity of the wine rather than being the primary feature.”

The flavor changes are a little more complicated. “The flavor impact really depends on the barrels used; whether they are new bourbon barrels, previously used barrels that are fresh from a distillery or used bourbon barrels that have aged previous batches of 1000 Stories (my personal favorite, as they are more subtle),” says Blue.

Blue has been excited to see people reactions to his wine. “This project seems to know no bounds in terms of age, gender or wine experience. I make the wine to be enjoyed beyond that first sip; this is a wine for savoring and enjoying.”

“Big, bold wines are best for the intensity of bourbon barrel-aging, which is why Zinfandel is our flagship varietal,” says Blue.

A challenge that winemakers face with bourbon barrel aging is ensuring that the purity of fruit is maintained and that the tannins are well integrated. “To stack up to the robust flavors imparted from aging in bourbon barrels I have to consider the grape’s flavor intensity and tannin structure,” says Kasavan. “For Cooper & Thief Red Blend, I came up with a blend of predominantly Merlot and Syrah complemented by Zinfandel, Petit Sirah and Cabernet Sauvignon.” Like a fine bourbon, whiskey-barrel aged wine gains additional balance as well as big bold aromas and flavors imparted by the barrel aging process.

But, not everyone believes aging wine in bourbon barrels is a great idea. “I have seen some cheap California wine advertised that way but it seems like a bad idea,” says Eric Tschudi, sommelier and head bartender at Shuko in New York City.

Blue disagrees. He believes that not only is it a good idea to age wine in whiskey barrels, but it’s also a throwback to a bygone era. “1000 Stories was inspired by the pioneering spirit and quest for discovery that are so celebrated in America.” He adds, “I don’t know if I’ve always been a storyteller, but 30 years of winemaking have given me a lot of material for terrific stories. The story of this wine is really fun to share; experimenting, revisiting techniques from my early days as a winemaker.”

And as winemakers continue to reinvent, new styles and techniques will be born. It’s up to consumers to decide if whiskey-aged wine is just a flash in the pan or if it’s here to stay.